Our Coalition Partners Working to Pass a Pathway to Citizenship 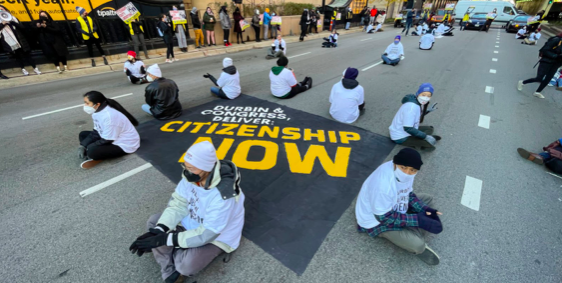 The Illinois Coalition for Immigrant and Refugee Rights (ICIRR), Mano a Mano, Hana Center and other coalition partners are leading advocacy efforts for Congress to pass a pathway for citizenship for undocumented essential workers, immigrant youth, TPS holders, and their families.

On November 3, 2021, twenty-nine community leaders and allies were arrested before a crowd of over 100 supporters following a civil disobedience demonstration to demand congress pass a pathway to citizenship this year. Community leaders and allies who participated in the action spoke about why a pathway to citizenship is important to pass this year:

Dulce Ortiz, Executive Director of Mano a Mano Family Resource Center, and Board President of the Illinois Coalition for Immigrant and Refugee Rights: “There’s no business as usual while our families and communities are on the line.”

Glo Choi, community organizer with HANA Center: “We will not stop until our community gains the rights they deserve by virtue of their humanity. We will not relent, and we will not go away quietly.”

ICIRR issued an official statement about the demonstration including full statements from community leaders and allies in attendance. Photos and additional statements were featured in Borderless Magazine.

The Build Back Better Act version passed by the House includes an option for work authorization but it does not include a pathway to citizenship. ICIRR and coalition members are now focused on demanding that the Senate include a pathway to citizenship in their version of the bill. We are in solidarity and support the efforts of our coalition partners to ensure equitable recovery for everyone, including undocumented essential workers and their families.

Get our Fast4ward newsletter